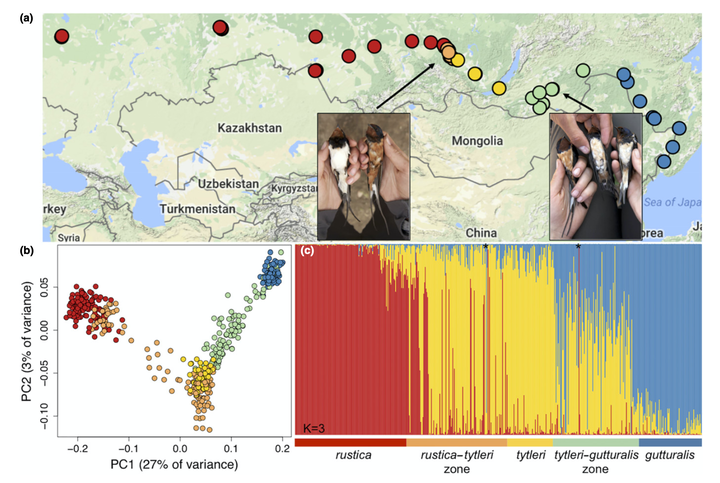 Hybrid zones are geographic regions where isolating barriers between divergent populations are challenged by admixture. Identifying factors that facilitate or inhibit hybridization in sympatry can illuminate the processes that maintain those reproduc- tive barriers. We analysed patterns of hybridization and phenotypic variation across two newly discovered hybrid zones between three subspecies of barn swallow (Hir- undo rustica). These subspecies differ in ventral coloration and wing length, traits that are targets of sexual and natural selection, respectively, and are associated with genome-wide differentiation in allopatry. We tested the hypothesis that the degree of divergence in these traits is associated with the extent of hybridization in sec- ondary contact. We applied measures of population structure based on >23,000 SNPs to confirm that named subspecies correspond to distinct genomic clusters, and assessed coincidence between geographic clines for ancestry and phenotype. Although gene flow was ongoing across both hybrid zones and pairwise FST between subspecies was extremely low, we found striking differences in the extent of hybridization. In the more phenotypically differentiated subspecies pair, clines for ancestry, wing length and ventral coloration were steep and coincident, suggestive of strong isolation and, potentially, selection associated with phenotype. In the less phenotypically differentiated pair, gene flow and phenotypic variation occurred over a wide geographic span, indicative of weaker isolation. Traits associated with gen- ome-wide differentiation in allopatry may thus also contribute to isolation in sympa- try. We discuss potentially important additional roles for evolutionary history and ecology in shaping variation in the extent hybridization between closely related pairs of subspecies.